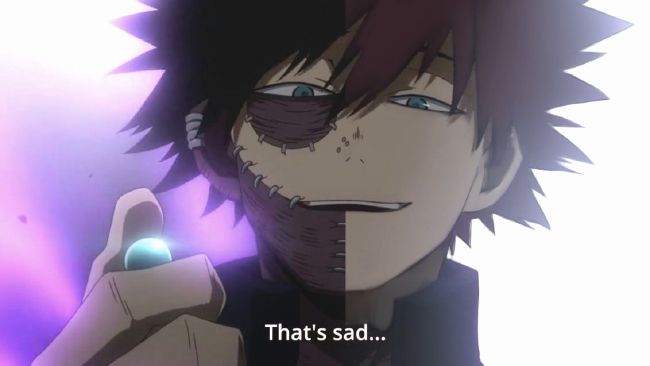 Dabi is from My Hero academia anime and is a member of the League of villains. Since the beginning of his introduction, he has become one of the most talked-about villains among mha fans. Well, there are many reasons behind why he is so famous and one of them is that Dabi is a Todoroki.

It’s literally confirmed canon and relax this article does not have any heavy My Hero Academia spoilers. So you will be fine and have all your questions answered about Dabi.

Dabi is a member of the villain organization’s “League of Villains”. Dabi and the rest of his villain league team serve as the main enemy of the School Trip Arc.

Dabi’s most noticeable feature is that large patches of his skin are deeply wrinkled and purple. The borders between those areas and the rest of his skin, appear to be held together by crude surgical stitches or staples. Rows of stitches extend from the corners of his mouth to above both ears, giving him something of a persistent smile.

How old is Dabi?

Dabi’s age is around 20 years old, but nothing about his personal information has been officially disclosed. The only thing that we know is that he was born on January 18th and in his early 20s.

Is Dabi a Todoroki

Dabi is actually Touya Todoroki, Shouto’s older brother. We know that there is a missing Todoroki sibling, Touya, who had a fire quirk stronger than Endeavour’s that mysteriously “died”. He was Shouto and Natsuo’s older brother.

There have been many clues about Dabi being Touya Todoroki, besides the fact that he has the same superpower as Todoroki and Endeavor. Dabi could be the missing Todoroki sibling, Touya.

Dabi told Tomura that he “goes by Dabi now”, though that is not in fact his real name, and that Tomura will know his name “when he wants him to”.Dabi reluctant to introduce himself to Tomura Shigaraki and rudely brushed off Tomura’s question about his real name.

This gives reason to believe that Dabi could perhaps be Touya, the dead son of Endeavour.

Dabi’s Quirk, Cremation, allows him to control his blue flames, just like Endeavor and Shoto. The only difference is the color. His Quirk is able to generate a large amount of fire from his hands, blasting a surrounding area.

Dabi is able to use it for offensive purposes. He is able to use it to kill very efficiently and leaving behind the charred and rotten corpses within seconds of coming into contact with his flames. Dabi has not shown any particular ability to precisely control the fire that he produces. It is unknown if he can do this, or if his Quirk simply allows him to shoot fire.

Why Dabi’s flames are always blue?

We can take the example of Endeavor’s flames, his flames are strong and he can also concentrate his flames and make them stronger, which turns them blue. Now you have got the idea that blue flames are pretty strong as compared to the red flames.

Dabi’s flames are always blue because his flames are so hot all the time (essentially at the level of a super move), it burns him if he overuses it.

How did Dabi get his scars?

There is more than one theory about how Dabi gets his scars? The first one is that Dabi, unfortunately, is not immune to the heat and cannot withstand his own quirk. That’s why he smells like burnt flesh and has purple scars.

And the second theory is that Dabi got his burns from his harsh childhood as Touya Todoroki. He’s lost control of his quirk when being abused by his father, Enji Todoroki, giving him scars and making everyone think he was dead.

If dabi’s scars are from his father. Then his father will recognize him. And if they’re from dabi’s own quirk, then how about the parts of his body that dont have scars. My theory is ( Not Official ), he wants to disguise himself. He wants to make people believe that touya doesnt exist anymore, theres only Dabi in this world. So he paint his hair, put some scars (from an animal flesh or human maybe), andbof course change his name