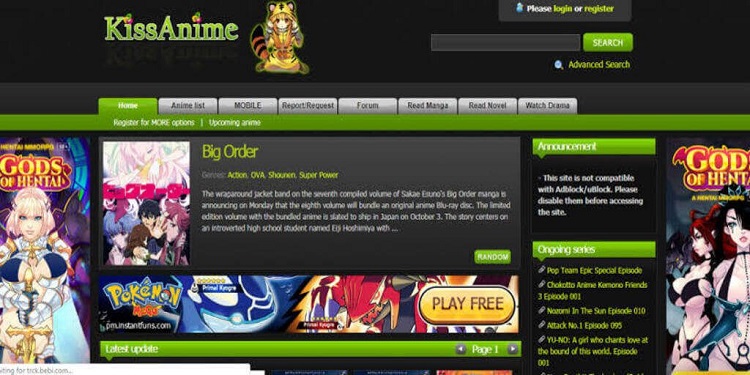 Kissanime was a popular illegal anime streaming site that has been taken down by copyright owners. The official KissAnime website is no longer available and will not be coming back. Even their official domain is no longer accessible. When the website was up and running it was used by many anime fans around the world.

KissAnime was a site that hosted mostly pirated anime shows and movies, offered to view for free by their users. Its parent company also ran similar sites for other genres like KissAsian, KissCartoon, and KissManga. Kissmanga also appears to be shut down.

If you think about KissAnime as an illegal anime streaming service, why has it not been taken down just now? Well, the answer is that they have been taken down many times. Most of the time they change their domain since they “host” all their content from other websites, and “embed” it into their own site. Making it even more difficult to permanently shut them down.

The question arises then why they choose to do the shutdown now or how they are able to do this now. The answer is due to Japan’s crackdown on piracy, the copyright law in japan will get more stern in 2021. Now you may not get the manga spoilers before the official release because of this law.

What happened to kiss anime?

KissAnime support team on discord announced that the shutdown was due to Japan’s strictness on piracy. All files and anime episodes on KissAnime and KissManga were taken down by respective copyright owners. Japan has passed stricter copyright laws from January 2021 onwards.

Where to go now that KissAnime is gone?

There are many alternatives to Kissanime, but you should go for the legal ones. Crunchyroll is the best legal alternative. As other illegal sites might be phishing websites using the original name. Some of them could also infect your device and trick victims into scams.

Which one is the real KissAnime?

The real one kiss anime website is with a .ru domain extension. All the other are just replicated site using the name of Kissanime. Since kissanime.ru is the real one and it got shut down many other sites with sam name have popped up.