Youtube is one of the most popular websites in the world.Also go-to video site for many people

But what if YouTube happens to be inaccessible? Or you simply want more options for viewing videos online? What alternatives are there? 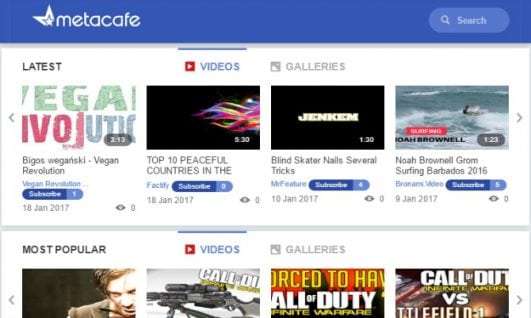 Metacafe a video site that specializes in shortform video content. This includes everything from highlights of the world’s best surfers, quick and to-the-point product reviews, and tips on how to complete a difficult level in your favorite video game.

If the Youtube is down then it is definitely Dailymotion.The second-best option you have at your fingertips to start viewing content on a daily basis. Since it features nearly the same layout and provides the same video categories as its video-streaming and uploading rival, users will get accustomed to using Dailymotion immediately.

Why it is not that popular as Youtube well it has a limitation, HD quality uploads are limited to pro users and there is a 4GB video limit, meaning that video uploads of around 60 minutes will be acceptable.

While many selections on this list feature a variety of TV series or movies, Screen Junkies specializes in original content that covers TV series and movies. Most of the site’s shows are comedic in nature. For example, in Honest Trailers, comedians voice their own versions of previews for various TV shows and movies.

Another good show available on Screen Junkies is TV Fights, in which self-proclaimed “TV nerds” argue about various topics, such as “What was the worst sitcom of the ’90s?”

Visitors can watch a handful of videos on Screen Junkies for free, but a full premium subscription costs $4.99 per month or 15 months for the upfront price of 12 ($59).

If you’re not yet familiar with TED, now is the time to get acquainted. The TED website features more than 2,300 talks covering a vast swathe of topics, such as technology, business, design, science, and global issues.

Some of the talks are funny, and some are emotional. Some talks are meant to teach you something specific, while others are there mainly for entertainment. The one constant with all the TED videos, however, is that you’re likely to take something memorable out of each one.

The TED website is particularly handy if you’re squeezed for time. Videos that appear on the menu are tagged with an easy-to-see red bar if they’re shorter than six minutes.

Even if you visit YouTube on a regular basis, it’s worth adding Vimeo to your regular rotation of video sites. The site was the first on the web to support high-definition videos, and while it does include a selection of user-generated fare, its emphasis is more on high-quality content.

Among other things, Vimeo features a number of well-known movies and TV series, such as E!’s The Royals, Spike TV’s Blue Mountain State, and Netflix’s Orange Is the New Black.

The site also has an easy-to-browse search feature that organizes videos by category and channel. Not sure what to watch? A regularly updated selection of Vimeo staff picks can help point you in the right direction.

Twitch’s strict motto is to watch gaming videos and nothing else.It first started as a concept but in just some time it becomes popular for watching content. For millions of internet users out there, Twitch is ideal for viewing ‘live broadcasting’ videos but its popularity is very pale as opposed to YouTube.

In terms of payout, Twitch might not be the suitable alternative but if you absolutely adore gaming videos, then this is the platform you should get stuck to right away.

Many of you may only know of MySpace as the mid-2000s social networking site that turned out to be a precursor to Facebook. The site is still around, and these days it’s putting a stronger emphasis on video.

Many of the videos on MySpace are interview-based and feature celebrities in situations you might not always see them in. For example, in the series Getting Nailed, various celebrities are interviewed while getting their nails done at a salon.

There are many other similarly themed interview videos on the site, many of which feature musical acts or action sports stars. For example, there’s The Pedicab Interviews: Dillon Francis, The Chairlift Interviews: Shaun Francis, and OK Go: The Ferris Wheel Interviews.

As its name suggests, Internet Archive is a web-based library of all sorts of free content, including books, music, software, and, of course, movies.

Just as you might associate a physical library with doing research, one of the strengths of the Internet Archive’s video content is its vast collection of historical content. While it does also have some newer content, some of its best videos are older and obscure news reports, TV series, and movies that are typically harder to find on other sites.

Like many other sites, users can also upload videos to the Internet Archive. When uploading videos, H.264 is the common video coding format used.

Owned by Sony Pictures Entertainment, think of Crackle as a sort of online TV channel that features both original shows for the web, as well as Hollywood movies and TV shows from various networks.

Some of Crackle’s original content has earned critical acclaim, including the web series Comedians in Cars Getting Coffee starring Jerry Seinfeld. It also has a good selection of TV shows from the past, such as All in the Family, 227, Firefly, Mad About You, and News Radio. 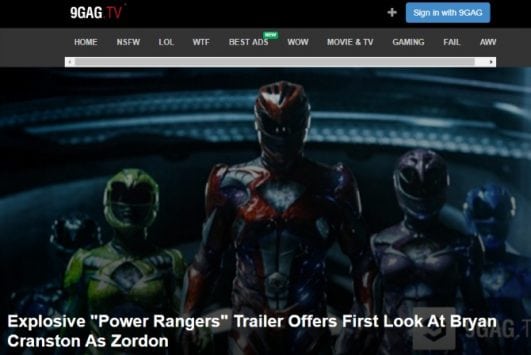 Think of 9GAG as a collection of all things funny photos, GIFs, gaming videos, memes, anime, and the like. In fact, the site’s tagline is, “Go fun yourself”.

Most of the content is fun and frivolous. Video titles include things such as “A Compilation of the best Commercials Starred by the ‘Star Wars’ Crew,” or “This High School Love Story Will Warm Your Heart and Then Break It Before You Know What Happened.”

It’s the type of stuff that’s hard not to click on and then spend hours browsing. Before visiting, be warned: the site contains a number of videos that are somewhat risqué and may not be safe for work.