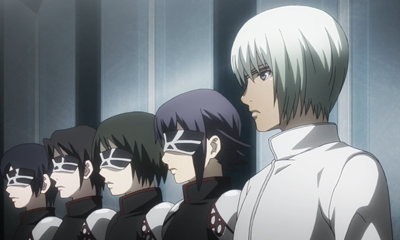 Oggai are the new forms of One-eyed ghoul that were created differently from Qunix in a new and innovative process.  They were created after Kichimura Washuu appointed as a director using Akihiro Kanou’s perfected Kakuhou transplant surgery.

Qggai are totally different from previous One-eyed ghouls and the Qunix cause they have the ability to activate one or both Kagune at once. It is stated that nearly hundreds of individuals were produced and each with the enhanced to be a superior tracker and adapt ghoul exterminators.

How Oggai was created and why?

Oggai was created using the Kakuhou of Rize Kimishiro by Dr.Kaou’s transplant surgery same as Kaneki. They were created to defeat Kaneki and all ghouls in 24th Ward later deployed to exterminate the organization known as Goat during the Goat wipeout Operation.

Oggai are stronger than most of the ghouls in the series. They are able to wipe out 80% of the ghoul that even all CCG investigators were unable to do, not even Arima did that. They were strong enough to kill some members of the Arima squad. Kichimura compared them to Kaneki, the original prototype they are all based on.

Where are they now?

All Oggai’s are dead now there is not a single one alive. They have died during the Goat Wipeout Operation when Kaneki transformed into the dragon after absorbing the RC cell, which overloads from the Oggai’s bodies and he killeds all the Oggai’s from everywhere.