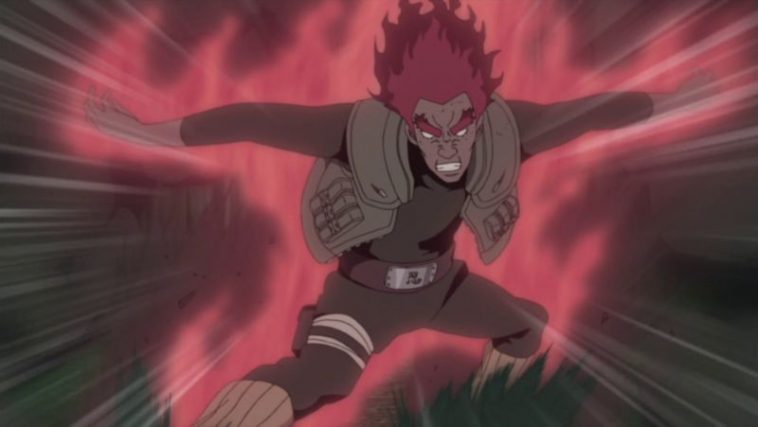 Might Guy vs Madara Uchiha is one most interesting fights in the War arc of Naruto Shippuden. Let dig deep down on what power Might Guy uses and fight out if 8 Gate Might Guy can beat Madara.

Might Guy opened the 7th Gate at first against fighting Madara. As soon as he opened the Death Gate, Madara called him the Blue Vapor. It indicated that Madara knew about the 8 inner gate formations. Then Guy sensei used some Taijutsu moves to hit Madara, or should I say his intention was to catch Madara off guard. Then he used the Hirudora.

This is an A rank Kinjutsu. That means this Taijutsu is a forbidden Jutsu. Hirudora is very effective from short-range to mid-range. It is basically a controlled air-pressure using specific a tiger hand seal. Then the air pressure forms into a form of a tiger and attacks the opponent.

Guy used this Jutsu right after catching Madara off guard. However, this incredible Taijutsu that almost killed Kisame in an earlier fight, does almost nothing to the God-like Madara. He had just pushed 15-20 meters backward from where he was standing. Thanks to Rock Lee, he brought his sensei back to a safe distance.

After that Might guy had to open the 8th Gate, the Gate of Death.

So, he opened the Death Gate, and right after that, he used Sekizo, Evening Elephant in English. This Jutsu is also an air-pressure-based offense attack. This short-range A rank offense attack is also Kinjutsu, meaning forbidden technique. But, as the situation demands, Guy-sensei used this ultra-offense Jutsu, not once but twice.

At first, he stopped after a single shot, as the pain of cracking the bone was too much to handle. But later he started attacking consecutively with unreal movement. And by the unreal movement means, quite unreal even for this show. He was going upwards by kicking the air. As the last step of this attack was going to rough, Madara tried to block them with his Truth-Seeking Orb. But thanks to the combined assistance of Minato, Kakashi, Lee & Gaara the last attack was successful.

After all the attacks, there was only one attack left in Might Guy’s arsenal. That was Night Guy. The final attack. It was a short-range super offensive attack. An S rank Jutsu. He charged the last bit of chakra that he had left in him and attacked with all his might.  As a result, Guy almost killed the Juubi Rikudou Sennin Madara.

Night Guy is basically a powerful kick while attacking a dragon shape appears in front of the opponent. By this attack, Guy crushed the left side of Madara completely. But thanks to the Hashirama cells that he possessed, Madara grew back.

The drawback of opening the 8th Gate

At that time, after opening the 8th gate he was 10 times stronger than the 5 Kage. Cool, right?

Well, probably I should remind you that if anyone opens all the 8 inner gates, he certainly dies. But, in this case, thanks to Naruto’s Sage of the six paths’ power Guy Sensei did not die. After the battle, Naruto came out of nowhere and kicked the Truth-Seeking Ball of Madara. And then he sealed the chakra point somehow and stopped him from burning his body out into ashes. 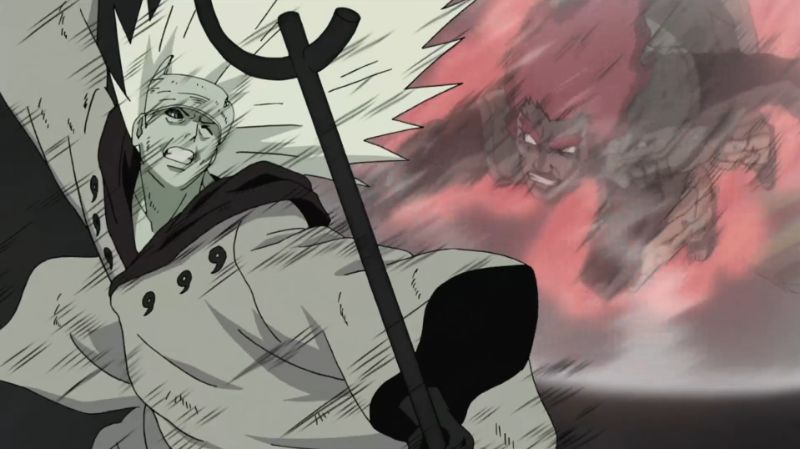 No, Madara in his nine tail for was just testing out Guy’s strength. Using the Eight Inner Gates, Guy was able to overwhelm Madara in a fight, not giving him even an inch. That lead Madara to appreciate the power of Might Guy.

Might Guy starts to fight Madara in Episode 418 of the anime when he opens the seventh gate. He did not open the Eight Inner Gates until Episode 419, with that fight commencing in 420.

Those who have finished Naruto Shippuden’s 500 episodes or watched the Boruto series/movie must have noticed it. You obviously have noticed the power of youth, our beloved Guy Sensei is on a wheelchair. So, why is that?

That is because Might Guy fought Madara (SSP) in the 4th Great Ninja War. Yes, he did fight against the Sage of the Six Paths Madara Uchiha who was happened to be the 10 tail Jinchuriki.