Kushina Uzumaki is the mother of Naruto Uzumaki and the wife of Minato Namikaze. She was the Jinchuriki of 9tail fox herself. What else do you need about her?

1) Kushina was an immigrant:

As the Uzumaki clan was wiped out, Kushina was brought to the Hidden Leaf village. So, to the village, she was an immigrant for the time being. She had a hard time finding any friends. But, after Minato rescued her from the hidden cloud shinobi, she came closer to him. And eventually, she fell in love with him.

2) Kushina was brought to be the Jinchuriki:

Mito Uzumaki was the previous Jinchuriki of the 9 tail fox. After 1st Hokage collected the tailed beasts, the 9 tail was sealed inside her.

When Minato and Kushina were in the academy, it was Lord Hiruzen who was the Hokage. So, till then there was no female Hokage in the village. And, Kushina wanted to become the Hokage. As Tsunade was selected Hokage later, as Hokage, if Kushina really became Hokage, she would be the first Female Hokage.

Naruto inherited the dream of both of their parents.

Unlike most other Ninja, Kushina didn’t really want to fight anyone. Though she was tomboyish and used to beat other boys, she never wanted to fight anyone in particular.
The fact that she got into the fights on the first hand was because the other kids tried to bully her. And good lord, she was not someone whom you can bully. Eventually, they learned their lesson.

Kushina’s favorite phrase was “don’t give up until the very end”. As we see from the very beginning of the show, our main protagonist Naruto had a similar kind of catch-phrase. In Naruto’s case, he used to say not giving up was his ninja way. And he really didn’t quit or run away.

So, yeah. I guess, he got that phrase from his mother too.

Kushina had a verbal tic. Whenever she got flustered or excited about anything, she ended her sentences with ‘dattebane’ or ‘-ttebane’. The word Dattebane doesn’t have any particular meaning of its own. It basically refers to ‘you know’ in Japanese.

Naruto also got a similar verbal tic like that. Naruto tends to end his sentences with ‘dattebayo’, which likely mean the same thing. And his son Boruto got that verbal tic too. Boruto ends his words with ‘dattebasa’ at the end of it. 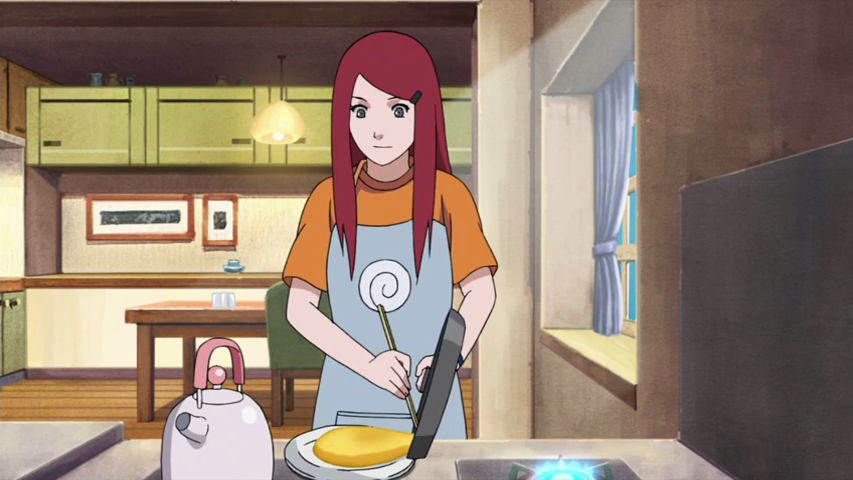 Kushina was very good at cooking foods. It was referred to in the databook that Minato’s favorite food was the food that Kushina cooked. Well, that could mean two different things. Either Kushina was good at cooking honestly. Or, Minato was just too kind and loved her too much, that’s why he loved her cooking.

As we never seen him flatter anyone with no good basis, it is quite clear that Kushina’s cooking was delicious.

Usually, when the Tailed Beast is extracted, the Jinchuriki or the vessel dies. That is what must happen. However, there are a few exceptions to that. As far as the manga and the databook says, there were only 6 of them with the exception including herself.

The people who didn’t die after the extraction of Tailed Beast:

Though most of the members had other reasons to not die even after the extraction, Kushina didn’t die because of her vitality. Though she just gave birth to his child by then, she didn’t die. Later she helped Minato to immobilize the 9 tail fox.

9) Kushina was the 2nd Jinchuriki of 9 tail fox:

Kushina born on July 10. Here the blood group was B.

Kushina’s hobby was chatting and pulling pranks. No wonder why Naruto was a prank-star, to begin with. Almost most of his personality, Naruto got from his mother.

Kushina and Minato picked the name Naruto from the novel that Jiraiya wrote. In his first novel, Jiraiya wrote the tale of a gutsy ninja who refuses to give up. And Jiraiya took the name from a vegetable while eating Ramen. So, yea! It was Ramen ingredient that decided what Naruto’s name would be.

It all comes down to a bowl of Ramen, doesn’t it?

Kushina’s name was taken from the mythical character Kushinada-Hime or Princess Kushina. In the myth, Kushinada-Hime was abducted by and was about to be devoured by Yamata no Orochi. Then Susanoo rescued him and later after defeating Yamata, he married Kushinada-Hime.

In the anime, we saw almost a similar kind of event where Minato rescued Kushina from Hidden Cloud shinobi and later both of them fell in love. Susanoo was the God of wind and storm. And Minato’s surname Namikaze also means wind.

So, there is a big mythological reference out there.