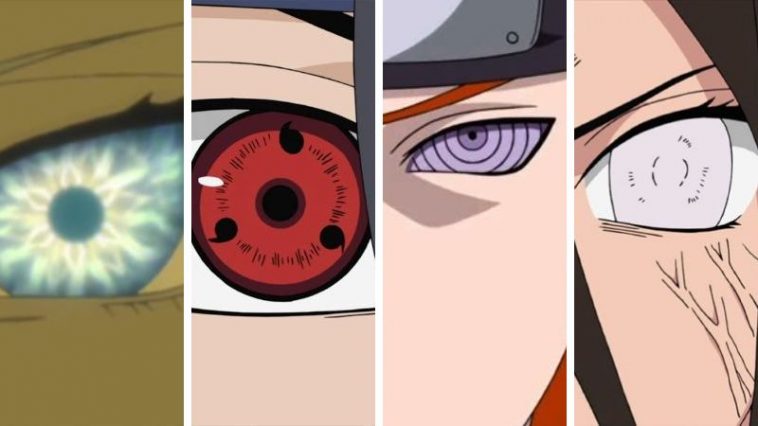 The world of Naruto is filled with so many iconic ninjutsu it’d be difficult to categorize, list, and describe all of them. However, the most memorable of them all were the dōjutsu or the eye powers. While the two most memorable are the Byakugan naruto eyes Sharingan, there are so many permutations of them it can become confusing trying to remember what they do, who used them, and some of the jutsu (literally techniques) associated with them. So, let’s take a look at all the dōjutsu from the Naruto anime, and what they do. 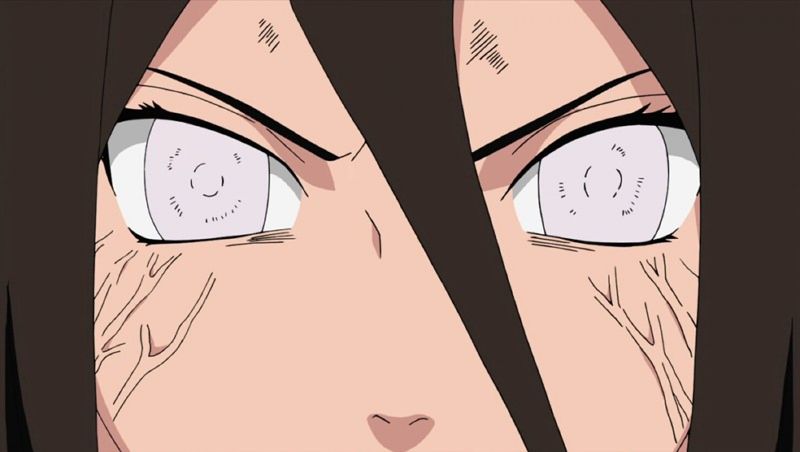 Inherited by members of the Hyuga clan from birth, the Byakugan allows users to see 360 degrees around them and see the flow of chakra in their opponent. There is one weakness, though, a small blind spot on the user’s upper back. Other than this one weakness, users have an immense field of vision when the powers of the Byakugan is activated. When the power of the Byakugan is coupled with the Hyuga clan’s secretive Gentle Fist style of fighting, they become a dangerous foe.

Some of the most notable users of the Byakugan are Hinata Hyuga and Neji Hyuga. However, Hinata’s father and sister are also adept at using the Byakugan and the Gentle Fist style of fighting. Hinata’s daughter Himawari Uzumaki has also used the Byakugan in the DVD extra of Boruto: Naruto the Movie. 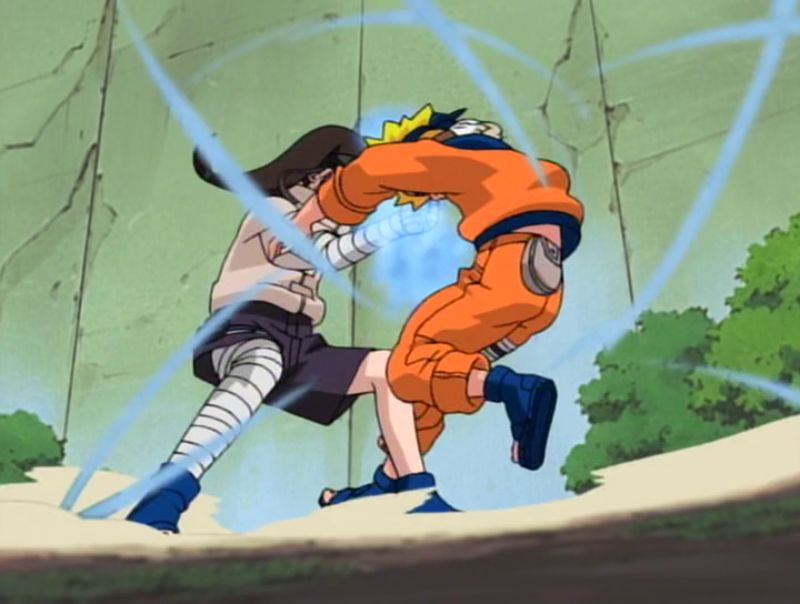 Chakra Point Needle: An attack directed at a single chakra point in the chakra flow system. The attack will stop the flow of chakra beyond that chakra point.

Palm Heal Strike: An attack using the palm of the user’s hand. When the attack strikes an opponent, chakra is directed into their body. This can result in stunning the opponent or causing internal damage depending on the amount of chakra that’s used in the attack.

Palm Rotation: The user releases a large amount of chakra from their chakra points and adds a spinning movement to deflect an opponent’s attack. This defensive maneuver is used to cover the small blind spot of the Byakugan.

Sixty-Four Palms: This technique utilizes the 360-degree vision of the Byakugan and the Chakra Point Needle attack to perform a 64 hit attack on an opponent’s chakra points. By attacking 64 chakra points, the opponent is rendered helpless and unable to stand.

Twin Lion Fist: An attack developed by Hinata Hyuga. She expels chakra from her hands in the shape of Shinto shrine guardian lions. These lions drain the chakra from anything they touch. 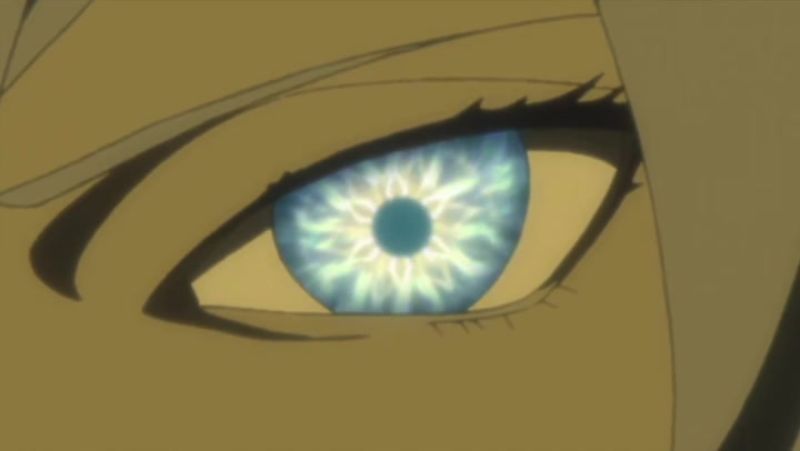 There have only been two known characters who have possessed the Tenseigan, Hamura Ōtsutsuki, and Toneri Ōtsutsuki. 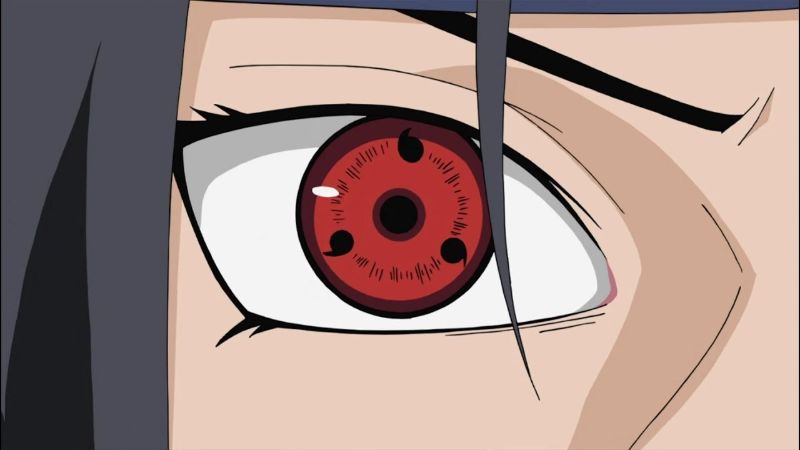 Inherited by members of the Uchiha clan, the Sharingan allows three primary abilities: First, the ability to copy any jutsu he or she has seen. Second, increased visual perception—allowing the user to mimic another person’s movements, read a person’s movements, and dodge fast-moving objects, among a few other things. Finally, the Sharingan gives users the ability to put their opponent in a state of hypnosis. This makes members of the Uchiha clan formidable opponents.

Unlike the Byakugan, the Sharingan’s power first manifests under specific conditions, including, but not limited to, when the user is in extreme danger, strong emotions of despair, and the desire to protect or be with a loved one. But, once the power manifests itself, the Sharingan can be used freely.

Sasuke Uchiha and his older brother Itachi were two prominent characters who use the Sharingan. However, Kakashi Hatake had a Sharingan transplanted into him after the supposed death of this teammate Obito Uchiha. The villain Madara Uchiha also uses the Sharingan for his own devious purpose.

Izanagi: This technique allows the user to turn any attack or death into a mere illusion. Using Izanagi will permanently seal the Sharingan’s power.

Izanami: This technique traps a target in a time loop, forcing them to relive a single moment until they refuse to act or die. Like Izanagi, using Izanami will permanently seal the Sharingan’s power.

Characters that have obtained the Mangekyō Sharingan include Indra Ōtsutsuki, Madara Uchiha, Itachi Uchiha, Sasuke Uchiha, Obito Uchiha, and Kakashi Hatake. The Eternal Mangekyō Sharingan has only been obtained by two known characters: Madara and Sasuke.

Amaterasu: This technique produces a black flame that consumes everything in the user’s field of vision. No conventional methods can put out the flame; only the user can put it out.

Kamui: This technique allows the user to transport him or herself to and from a pocket dimension.

Susanoo: This is the ultimate technique of the Mangekyō Sharingan. The user is surrounded by a humanoid construct made of Chakra. The construct is an extension of the user and fights and defends on the user’s behalf.

Tsukuyomi: A powerful genjutsu that traps a victim in an illusory world. The caster controls the passage of time in the illusory world. Itachi Uchiha is seen numerous times using Tsukuyomi as a means to torture his victims. 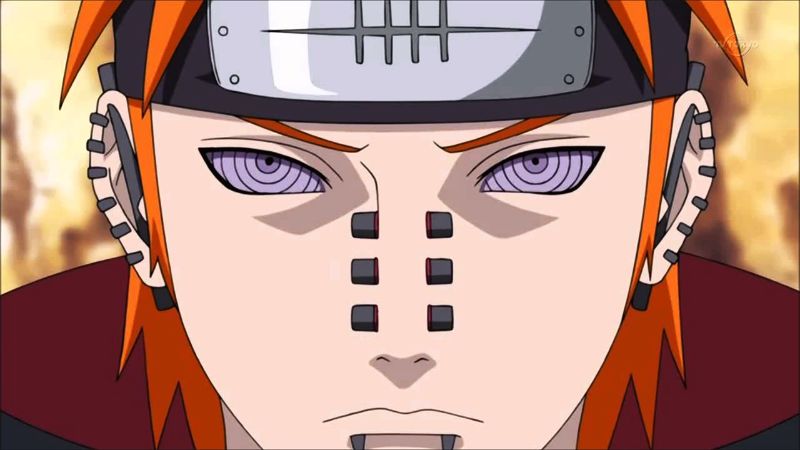 One of the rarest dōjutsu, the Rinnegan is the penultimate form of the Sharingan. While the Byakugan and the Sharingan are inherited through a character’s linage, the Rinnegan is created through very specific circumstances. The first known method is by having the progenitor of ninjutsu Hagoromo Ōtsutsuki share his chakra with a character who possesses the Mangekyō Sharingan. The second known method is by mixing the chakra of Hagoromo’s sons or their reincarnations together.

Once the Rinnegan manifests, the powers of the Mangekyō Sharingan become unavailable while they are using the Rinnegan. But, when using the power of the Rinnegan, new abilities are unlocked. These include the use of the Six Paths Techniques, teleportation, Chakra absorption, and a few others.

Amanotejikara: The technique allows the user to teleport a short distance by switching places with another object or person.

Outer Path: This technique allows the user to revive the recently deceased, transmit chakra to another person, and summon chakra binding-chains. 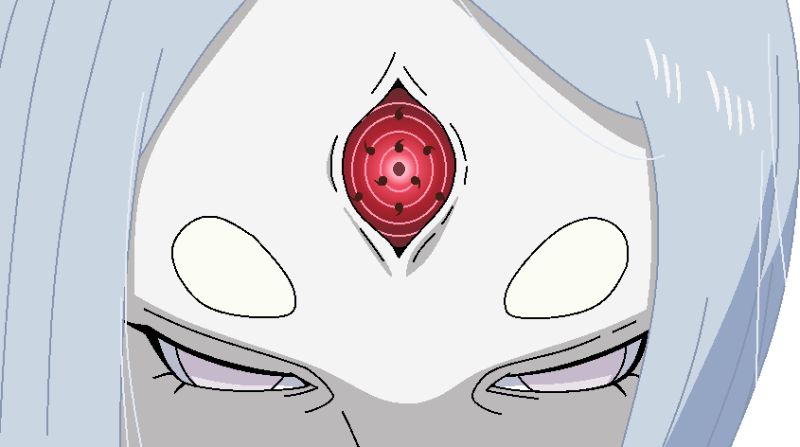 The Rinne Sharingan is the ultimate form of the Sharingan. The power manifests under even rarer circumstances than the Rinnegan: eating the fruit of the Chakra Tree. Only one character is known to have the Rinne Sharingan, Kaguya Ōtsutsuki. Sasuke Uchiha has a very close permutation of the eye, but it’s not a true Rinne Sharingan.

Ame no Minaka: This technique allows Kaguya to transport herself, a single target, or everyone within a certain range to one of seven parallel dimensions.

Infinite Tsukuyomi: This technique traps the entire world in an unwaking illusion. The illusion lets the victim dream of their perfect world. While trapped in the illusion, the Chakra Tree absorbs the victims’ chakra. 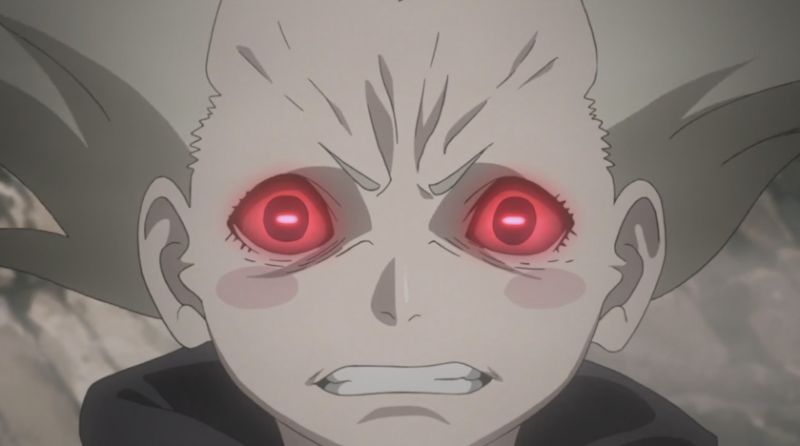 Three other unnamed dōjutsu have appeared in the Naruto franchise. These belong to the characters Ranmaru, Shion, and Yome. 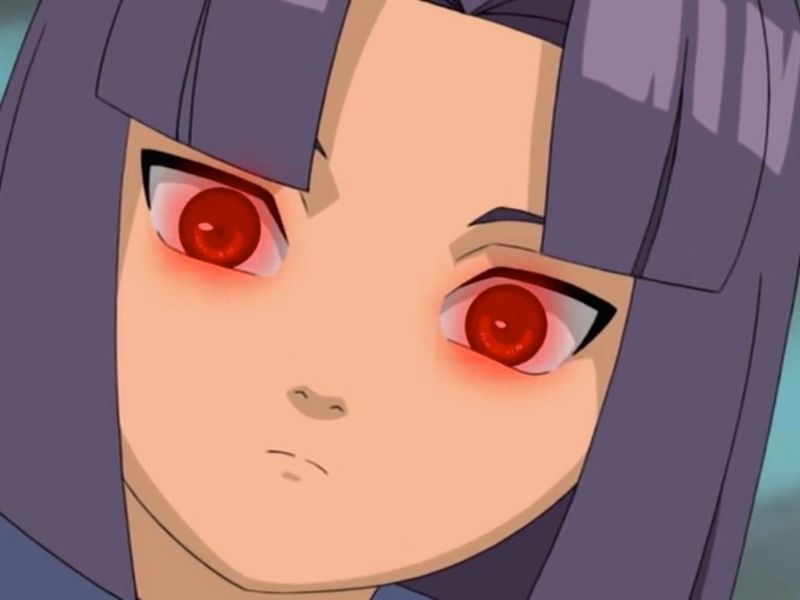 Ranmaru’s dōjutsu has similar abilities as the Byakugan in that he can see through objects. However, he has the ability to disrupt other dōjutsu. When Ranmaru uses his dōjutsu, his eyes turn a bright crimson color. 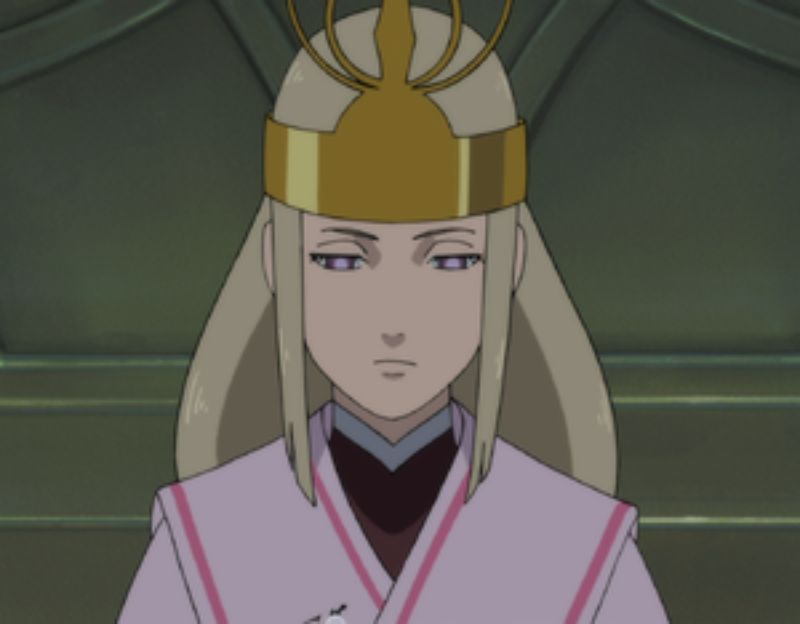 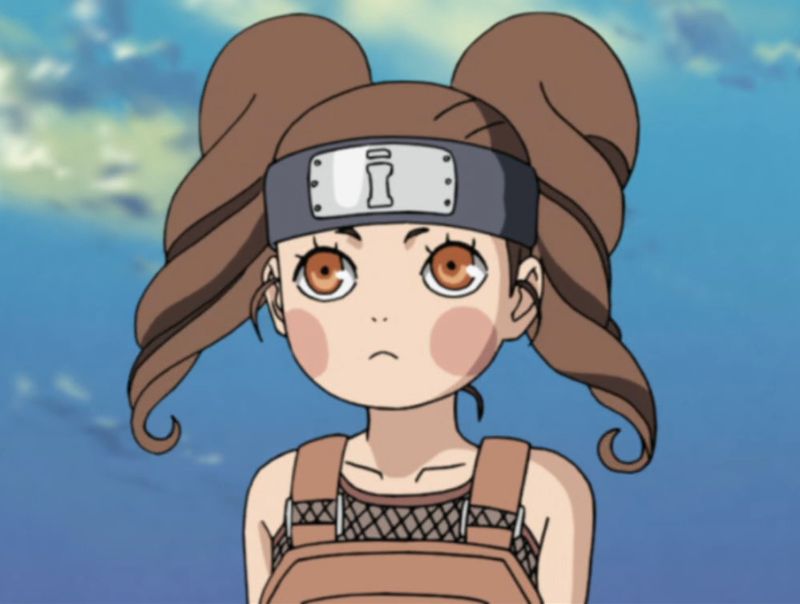 Yome’s dōjutsu allows her to focus her vision to track people via the water droplets in the air. But, due to the evaporation of water, she can only use the ability for a limited amount of time. Her enhanced vision also makes her susceptible to bright flashes of light.

Now with Boruto discovering the power of his eyes Jogan, we’ll soon have one more dōjutsu to add to this long list. What powers will it hold? You can read the full article here.

Worried About Privacy when watching anime on Free sites? You Need a VPN – And Here’s Why!

Finally, don’t make a mistake thinking that all VPNs are the same. Based on our years-long experience of reviewing VPNs, the best VPN right now is NordVPN. This especially goes for fans of torrenting, who’ll find that NordVPN meets practically ALL their needs.

Right now, subscribing to NordVPN lets you save 69% OFF its regular price. On top of that, you get 3 EXTRA MONTHS! That means that now’s the best time to act and protect your torrenting activities.